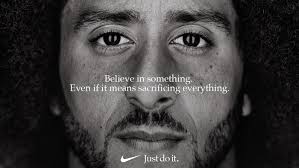 Kaepernick, the former 49ers quarterback, emerged at the center of a firestorm for taking a knee during the National Anthem, an action that sought to highlight racial inequality and police brutality. His protests have inspired many players in the league to join him while simultaneously provoking condemnation from others, including President Trump, who has used the issue to sow further cultural divide from his bully pulpit. Those railing against this protest have often incorrectly conflated it with disrespect to the flag and American values.

Nike, #89 on the 2017 Fortune 500 list, has fashioned a new advertising campaign foregrounding Kaepernick and pushing the message, “Believe in something. Even if it means sacrificing everything.” Boycotts have ensued. However, for all of its controversial cachet, the challenges with Nike's campaign prove multi-dimensional.

First, the advert utilizes faux-inspirational sentiments doing nothing to clarify the context surrounding racial injustice and police brutality which ignited Kaepernick to take a knee in the first place. If Kaepernick’s protest was initially received by many as abstracted signification, then the Nike ad further complicates this messaging; sanitizing it and reducing it to little more than a cliché motivational poster.

Secondly, Nike is hardly the right company to launch a campaign highlighting progressive values due to their history of corporate greed: reliance on slave labor, factories which contribute significantly to climate change, a misogynistic work culture that has been called out in the #MeToo movement.

In her book, No Logo, Naomi Klein charts the shifting role of activism in the Western world over the past century, from its original focus in economic parity over to concerns with imagistic representation writing, “The abandonment of [key social protest] by the conflation of causes that came to be called political correctness successfully retrained a generation of activists in the politics of image, not action.”

Maybe through Nike’s longstanding relationship with professional sports, and the NFL in particular, this ad campaign will provide league owners with the necessary cover to rehire Kaepernick back into the NFL.

My call to action is that we all take a knee.

The current brand of politics entrenched in white nationalism and marinated in fear of the Other is severe. We cannot allow anyone's voice to be silenced and we cannot allow this symbol - which has contributed positively towards opening a cultural conversation – to be reduced to an image appropriated by mass-marketing; nothing more than a new way to sell running shoes.
Posted by Derek Dubois at 6:37 PM No comments: