Derek Dubois to be Featured in Peer-Reviewed Film Journal

This fall, Derek Dubois will once again appear in print in the peer-reviewed film journal SHORT FILM STUDIES which is published by Intellect LTD.  You can find more information on this wonderful journal at the following link:

Watch for publication this fall.  In the meantime, enjoy an excerpt from Sheffmann's short film which served as the basis for Dubois' analysis.

Posted by Derek Dubois at 12:12 PM No comments: 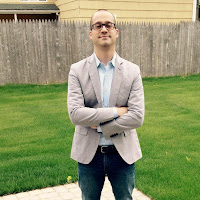 On Thursday 03/15/2015, Derek Dubois was invited by frequent collaborator Soren Sorensen to serve as a guest filmmaker for Film 373 - Introduction to Film Production Course.

The class, featuring upper-level film undergraduates, screened three of Derek's films: Fallout (2012), Lucid (2013), and Sinners (2014) before venturing into a lively discussion on a range of topics from low-budget film-making to feminist film theory.

This was an exciting opportunity to highlight the works of this local filmmaker while also allowing for a sharing of advice on DIY methodologies.

Posted by Derek Dubois at 12:04 PM No comments: