Semiotics and the Confederate Flag Controversy 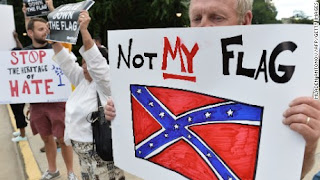 Below is an essay written by Derek Dubois and published as a Letter to the Editor in the 7/20/2015 edition of The Providence Journal.

I am concerned over the heated rhetoric exchanged of late in regards to the Confederate Flag’s removal from government grounds in South Carolina. At the national level, public figures such as Bobby Jindal are claiming a violation of heritage. At a personal level, I see Facebook profile pictures being replaced with images of the Confederate Flag and long, rambling posts decrying the removal of the flag as an infringement on rights; another cowardly cessation to the Political Correctness movement. In either case, there are a lot of arguments from both sides regarding the true meaning of the Confederate Flag. Each side cites meaning in their positioning – and here we stand in gridlock.

What we’re really talking about is Semiotics, study of visual representation, of signs and their signifiers. Semiotics explores relationships between images and their encoding of ideology. It infers no separation between intention in the medium and greater symptomatic meaning. Essentially, the viewing of an image (i.e. a painting, a film, a flag) cannot be isolated to the original intention of said image but must consider all relationships forged between image and spectator across time.

For example, the 1930s saw unprecedented atrocities strike the Western Civilized world as Nazi Germany brought genocide and war in an attempt to harbor Eugenics for the creation of a Master Race. The hatred borne out of this movement cursed a number of icons associated with it. No longer can men grow the delightful Charlie Chaplin “Tramp” mustache. No longer does the once-common German name Adolph (or its permutations Adolphe in France or Adolfo in Italy) sit amongst the “most popular boy’s name” rankings as it had pre-WWII. No longer can the swastika, originally a popular international symbol for “good luck,” ever divorce itself from the Nazi party. Today it is not seen as an act of rebellion to tattoo a swastika on one’s person; it is a defiant claim of racism.

The Confederate Flag’s many signifiers must be considered in this debate. Unfortunately, any potential additional meanings the flag may have are subjugated to the taint of hatred and prejudice the flag has attained during its history. In the 1860's, the Stars and Bars (an original version of the Confederate Flag; not the popularized design of today) was created to represent the Confederacy. During the Civil War, the flag was encoded with the ideology behind the Confederacy: a refusal to acknowledge abolitionism and emancipation. This flag saw many permutations and design changes over the next 100 years, reaching well-beyond the end of the Civil War and extending into the Civil Rights movement. Regardless of the many intended meanings of the Confederate Flag, past and present, the fact is that it has been co-opted in the hearts and minds of many in possessing ghastly implications about race and inequality.

Many have previously, and are now currently, attempting to re-claim the Confederate Flag as a symbol of heritage, of rebellion, of Southern Pride - to honor those lost during the Civil War. All of those things may be true; an image can hold many meanings simultaneously. But the Confederate Flag will never be divorced from flying as an emblem of inequality and racism. That is now part of the icon’s DNA. Those who refuse to accept that meaning are ignorance personified. This great nation is a melting pot of race and ethnicity; a country forged by immigration and differences. Our shared national history has some black-eyes (to put it mildly) and it is important to remember this when considering taking a stance on an image as loaded as the Confederate Flag. To many (especially non-white minorities), the flag symbolizes little more than exclusivity, inequality, and occasionally corporeal danger. No one who is a legal citizen of this country should be made to be reminded of this on a daily basis by our government institutions. If it is heritage one is trying to celebrate, focus on the pre-amble to the Constitution. Adopt a new icon, one that is less loaded, to demonstrate Southern pride. If it is rebellion one is trying to conjure, fly the image of Arthur Fonzarelli. That’s an icon we can all get behind.
Posted by Derek Dubois at 6:21 PM