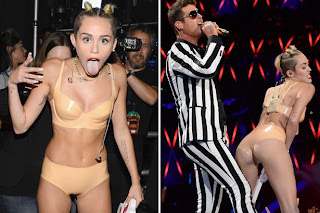 Somehow, it still amazes me the level of hyperbole and attention garnered by vapid celebrity culture today.  With our ephemeral (er, disposable) digital entertainment, MTV (and everyone else) is in need of inventing ways to keep its currency alive.  This reveals less about a quest for culture mined from substance and more about attempting to top the previous year’s absurdity.  And how could MTV ever truly compete substantively with Syrian chemical attacks or Congress’ Debt Ceiling?  It can’t.  However, what it can offer is the N’SYNC reunion no one asked for or Miley Cyrus’ twerkin’ on the VMA stage.  It is the latter that enthralled the zeitgeist so intensely these past 24 hours.  CNN’s homepage devotes not just a single story but a sizable section of web page real estate to a collection of stories about Miley’s six-minute performance.  All day long I’ve been bombarded with commentary on the news, at the water cooler, on my Facebook wall ranging from general moral outrage at the young starlet’s overt sexuality through damning and sexist objectification of her body.

If anything it is the child star that is the victim and not the perpetrator.  At the age of 27 I still make terrible decisions on a fairly regular basis.  If I had been groomed from an early age by an entourage who thought I could do no wrong, made obscene amounts of money, and had hit television shows and radio airplay, I’d probably be trying to build tree houses out of hotdogs or riding my pet shark while wearing a necklace of sirloin steak.  Unfortunately for her, Miley's mistakes are magnified through her celebrity to a level of noteriety unknown by all but a handful of human beings.  The point being: the Miley Cyrus on display last night is a kind of Frankenstein’s monster; a mish-mash of the desires of many (older) hands looking to create controversy.  Why?  Controversy generates news stories.  New stories keep items relevant.  Relevance generates cash flow.  Beneath the performer, is Miley Cyrus even a real person?  That’s the interesting question, to me.

And for everyone and their mother who felt the need to vocalize their opinions so loudly and harshly: that they didn’t approve of the garbage, the trash, the scandal then can I ask why were you watching the MTV Video Music Awards in the first place?  Did you tune to MTV for anything else?  Didn’t you realize that Breaking Bad was on?


AUTHOR'S NOTE: Shortly after posting this commentary, I was contacted by an A&R Administrator from Miley Cyrus' label RCA records.  She informed me that, "the label did not know about [the content of her MTV VMA performance].  Her camp may have, but we did not.  [Miley's] one of the few artists that label execs can't influence what they do - she is going to do what she wants, when she wants, how she wants..."
Posted by Derek Dubois at 6:14 PM No comments: