Newtown Shooting - On the Media 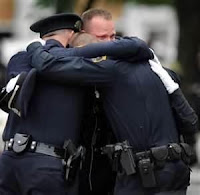 In recent days there has been an escalation in the discourse surrounding the media’s role in portraying national tragedies like the Newtown school shooting. Many have cried foul at News Media outlets indicating they should be ashamed for perpetrating the current culture which creates celebrities out of killers. Many believe the staggering attention devoted to the criminals (as opposed to the victims) catalyzes the cycle over and over again. Just ask fake Morgan Freeman. To some degree, there should be a level of shame involved. In the particular instance with Newtown, there was blatant misinformation reported in the immediate aftermath of the crime. Also, the decision to interview children and victims so soon after the event will likely scar these individuals for life. That said, the blame for this abhorrent culture cannot be assigned purely to media channels but rather to the consumer: us.

The ever changing role of technology has consistently developed new platforms for speedier news delivery which allows reporting to reach wider audiences with more accessibility than ever before. The gaps of space and time have all but closed in this digital age. In 1963, with the assassination of President Kennedy, broadcast television news emerged as the dominant medium for up-to-the-minute reporting. After the 9/11 terrorist attacks, 24-hour cable news channels took that prize. Today, the lines are blurring with cell phone updates, internet streaming, blogging, social media, and infinite other means of sharing information and news electronically. I personally distinctly remember discovering Bin Laden had been killed through a drowsy early-morning sift through my Facebook wall.  Along with all of these increased avenues for obtaining news and information, people have been consuming consistently increasing amounts.

The medium has evolved allowing quicker and more specified/tailored information to funnel straight to consumers.  Also, the general level of interest in news information dramatically upticks during moments of crisis or tragedy. This surge in information consumption is independent of our culture's growing reliance on News Media. Academics have written much about the viewership trends in the immediate aftermath of 9/11. As professor Scott Althaus noted in his article American News Consumption during Time of National Crisis, “For the period from September 2001, through March 2002, the average cable audience more than doubled...” The point is that even though electronic news outlets are gaining consumers regularly, in times of tragedy or crisis viewership increases exponentially. This may seem self-evident on the surface but reflects on the true nature of reporting as an end-result of demands from news consumers. One can try to justify the motives behind the surge in viewership as keeping up-to-date with current facts but this cannot be the sole explanation behind the fascination with media post-tragedies.

So why is it that people are so interested in news stories related to large crises, terrorist attacks, or national tragedies?  Could it have to do with our species' innate interest in the fundamental power of storytelling?  Has the media taken a lesson from entertainment and infused narrative tenets into truth to allow viewers to better suture into the material? As David Altheide writes in The News Media, The Problem Frame, and The Production of Fear, "Popular culture includes a relatively large amount of information and images pertaining to fear, including crime and violence, and audience members perceive social life as very dangerous. It is the relationship between these two "social facts" that remains unclear."  Ultimately, I would argue that there is a link between the narrativized fear in media and the fear we feel within our environment.  The news is presenting stories that hook us based on formula regarding forces of antagonism and manipulating that fear within us to generate high viewership.  Still, correlation doesn't imply causation and it is difficult to determine the link between real societal fears reported through News Media and perceived constructed fear - though the lines are blurring between the two.

This notion of the attractiveness of fear for consumers yields another (at first seemingly unrelated) media question: why do so many people voluntarily watch horror films? The horror genre has been a staple of all art-forms since inception. Psychologists have repeatedly looked into why a viewer would subject themselves to such unpleasant emotional responses. According to Dr. Jeffrey Goldstein’s article, Why we watch: The attractions of violent entertainment, “Researchers have identified various motives for viewing horror films, including the need for excitement, the desire to feel intense emotions, and distraction from everyday concerns.” Additionally, many have argued that the genre serves to put viewers in touch with primordial concerns about fear of mortality. When screening a horror film, these fears can be exorcised in a safe environment. It appears to be human nature.

Horror films are often analyzed according to cycles that so often mirror social concerns of the period. During the 1950s films such as Invasion of the Body Snatchers (Siegel, 1956) and The Thing From Another World (Hawks, 1951) emerge in the wake of McCarthyism and the Red Scare. Simultaneously, Godzilla (Honda, 1954), Them (Douglas, 1954), and countless others imagine a world affected by nuclear fallout after the Hiroshima bomb. The 60s and 70s had a number of horror films focused on the violent destruction of the nuclear family (Rosemary's Baby (Polanski, 1968), The Omen (Donner, 1976), The Shining (Kubrick, 1980)) all while second-wave feminism was signaling the rise of independent women. Violent media tends to reflect our contemporary social-moods by putting individuals in touch with the scary elements of life. It allays our fears by allowing us to face them communally and safely. Therefore, the ultimate question remains: do we consume Media post tragedy to allay our fears from the comfort of our living rooms? Or, simply because we need to better understand the nature of the very real evil that lurks in our world?

Human beings are obsessed with the horrific, the violent, and the morbid. It satiates a fundamental curiosity within our psyches. Modern News Media organizations are facets of much larger media conglomerates, beholden to advertisers and viewers; capitalist ventures that seek to turn profits. In the law of business the customer is always right. Therefore, how can we condemn the media when during moments of tragedy and crisis we’re consuming it at all-time high levels? Keep in mind that CNN, Fox News, MSNBC, and the rest are simply putting up the mirror to return what we hope to see. So turn off the televisions and hug your children tighter. Forget the fact you ever heard Adam Lanza's name.  The real issue is not with the organizations reporting on the identities of killers but with our hungry desire to seek out the grisly details.
Posted by Derek Dubois at 5:35 PM