Tom Hardy in Refn's Bronson: A Brief Comment on Objectification

NOTE: This is merely a few words to capture a momentary thought in passing - not a full-fledged essay.

I have written extensively in the past on the role of feminist film theory in the western film cannon.  My master's thesis Silent Subversions tried to argue that a certain mode of filmmaking was briefly established during the silent era that catered to female spectators.  The model I offered was one centered around various aspects of female pleasure.  The important thing, when considering a model of female spectatorship, is to assess whether a simple inversion of Classical Male Spectatorship (that arrived at by Mulvey and countless others) is acceptable; i.e., does female spectatorship simply refer to a female gaze objectying the male body for some level of sexual gratification, does female spectatorship include some sort of punishment, or containment equivalent to a patriarchal ideology?  These are questions without easy answers as Mulvey herself tried to address, without as much success, in her follow-up to "Visual Pleasure and Narrative Cinema" entitled "Afterthoughts."

Recently I stumbled across Nicolas Winding Refn's Bronson.  The film is a visceral examination of infamous British prisoner Charlie Bronson (a name he adopted for himself based upon the actor) who's considered one of Britain's most violent.  He has been in prison for 34 years, 30 of them in solitary confinement.

What struck me so immensely about Bronson was the performance at the center of the film by Tom Hardy (Inception, Warrior, The Dark Knight Rises).  Tom Hardy is a an outstanding physical specimen in the film.  A man, a warrior, built of staggering muscle and rage.  The film attempts to analyze Bronson's behavior but does not try to explain it away in a laughable psychological profile hinting that he was abused as a child or anything.

Bronson loves to initiate fights.  It seems that this raw brutality and kinetic energy is what turns him on.  He stages myriad opportunities inside the prison's walls for masochistic beat-downs with piles of prison guards.  Hardy is often required to handle these fight scenes entirely nude (the film does not shy away from full-frontal nudity) as he greases himself and takes a fighting stance.

All at once, with Hardy/Bronson's showmanship, the impressive physique, the carnival-esque mustache, and the general spectacle with which Refn chooses to frame/film the titular character reminds me of cinema's early days.  The days prior to narrative where the spectacle of the medium was enough.  Where Sandow was a movie star and my theory of female spectatorship takes wings. 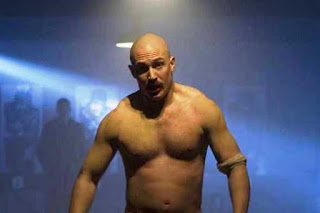 Ultimately I am unsure who Bronson is designed for.  The film is an art-house display of crass violence and grand spectacle with a very charismatic lead at its center.  Is erotic pleasure to be derived from a muscled body covered in blood, bruises, grease?  Are women a target audience of the film?  Is the pleasure homo-erotic at its core?  Or is pleasure eschewed by the film entirely.  Other filmmakers, notably David Fincher with Fight Club and Ridley Scott in Gladiator, have toyed with films containing beautiful men in displays of raw masculine brutality, but none seem to over stylize their lead.  It's a curious piece of art. 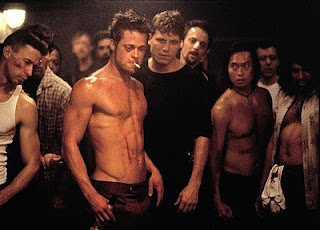