Hotel Chevalier, the magnificent short-film that prologues Wes Anderson’s 2006 film The Darjeeling Limited, is an exercise in pure filmmaking. The 12 minute narrative-short utilizes all aspects of film form expertly to tell the story of Jack Whitman (unnamed in the film; played by Jason Schwartzman) in a desperate attempt to escape his past by hiding-out in the über-posh Parisian hotel of the film’s title. Once his ex-girlfriend (also unnamed; played by Natalie Portman) tracks him down, Anderson parlays their rendezvous from mere sexual escapade to a grander statement on the necessity of human connection and the healing powers of shared experience. Through the film Anderson plays subversively with the presentation of traditional western gender roles only to ultimately re-affirm the traditional stance by film’s end.

Hotel Chevalier's screenplay excels at telling us the real story visually, often revealing information that the principal characters leave unsaid (or, further, betrays what they've said). This separation between the film’s surface level text and its underlying subtext makes for a richer viewing experience forcing active viewing, rather than passive entertainment, as the viewer reads the layers of text searching for meaning in the story.

The film opens with a series of images that present the setting of the Hotel in all of its luxury. Jack is introduced lounging on his massively lush hotel bed in a sumptuous robe attempting (and failing desperately) to order a grilled cheese from room service in sub-par French. Instantly, through Anderson’s mastery of mise-en-scene and the comedic introduction of the character we can already surmise that he is a man on a mission of escapism. Jack wants nothing more than to belong to this world of pampered luxury, to feel important, but his inability to adequately perform the simplest of tasks immediately clues the viewer that he is not of this world.  He is an outsider.

The mise-en-scene of the scene cradles Jack in an aura of femininity. Everything from Jack’s lounging in a robe, his passivity, his long shaggy hair, and his pampering are images and symbols that signify associations with the feminine. The excessive yellow of the robe bleeds into the yellow of the bedding which further bleeds into the yellow of the walls and room thus dissolving the surroundings into one large womb-like environment that comforts Jack.  Anderson enjoys the use of the wide angle lens, subjects center framed, and very little movement in the beginning of this film. His camera contains Jack Whitman. Is Jack escaping through this hotel or is he now a prisoner of the fantasy he’s constructed in delusion for himself?

The phone rings, a catalyst for the story, and it’s his unnamed ex-girlfriend. Jack’s stammering again clues us into the idea that she, if not the sole reason for his elaborate fantasy, is part of the general world that he’s running away from. After she announces that she’s in the lobby and will be forcing her way to his room Jack begins playing the role of the 50’s housewife and dutifully scours the suite to perfection. Without yet seeing Portman’s character it is clear she is the aggressor in their relationship. He cleans, changes, prepares the perfect pop song serenade on his Ipod, and prepares himself - and the hotel suite - as a tableau of sorts for Portman’s character. Everything he is working towards is an outward presentation for her; a manifestation of the physical, something tangible. And then, in one glorious static shot that subjugates Schwartzman in a powerless low place in a largely empty frame, Anderson forces us and his protagonist to wait interminably as we hear Portman’s slow approach: elevator bell, footsteps, finally a knock at the door.

When the door opens and Portman’s character is finally revealed the image of a gender reversal is completed. She, the aggressor (so typically masculine) has arrived bearing flowers for her sweetheart. Her hair is cropped shorter than his. Her outfit, one of cool and neutral grays under a trench coat, is reminiscent of the 50’s husband returning home from work. She doesn’t greet Schwartzman with warmth but rather critiques his choice of music and then parades around his suite silently judging the various objects his character has collected in this escapade. The moment culminates with her march into the bathroom where she uses his toothbrush without permission. Once again the visuals are entirely telling the story here. Her actions reflect both a past intimacy (a willingness to share a used toothbrush) but also the aggression of just taking what she wants.

The two characters engage in a conversation that provides viewers with the exposition needed to connect the dots of the story. Here it becomes more clear that Jack has indeed severed all connections to his previous life. Still, rather than what’s being said it’s imperative to look at how Anderson is telling the story. The two characters are spaced apart dramatically far across the suite. When Jack is questioned about his motives in staying at the hotel, he begins a poor attempt to masquerade for dominance in the relationship. The moment begins visually with his debonair and careless chucking of the candy wrapper to the bed. In this hilarious moment one can virtually see the desperation in Jack as he tries to claw out of the hole that he’s dug.

Portman's character is the one to falter first in this game of dominance. She sidles over to him on the bed. The two lie down, space between them; yet edging closer every moment.  Suddenly, they are momentarily interrupted by the room service Jack had ordered at the start of the film. The back-and-forth aggression continues when Portman's character orders Jack to ask the waiter for a Bloody Mary; obviously she could have asked for it herself. The relationship is seemingly returning to exactly the same doomed archetypes these characters inhabited before the story of the film began. When the waiter leaves they begin passionately kissing and make their way back to the bed.

Jack sits leaving Portman’s character powerfully standing over him in the frame. But here is where Anderson begins to slowly bring the Black and White clear-cut roles to more of a gray area. To balance out the power Jack strips her of her clothes revealing a wounded body covered in bruises. Is it not possible that her arrival at Hotel Chevalier is her escape from her own life as well? One where she’s clearly dominated, physically, into a world where she can once again dominate? More dialogue is exchanged but again, in a moment Robert McKee would be proud of, the silences of the subtext reveal far more information than the lies the characters spew to each other. Even through Jack’s last ditch desperate attempt to regain a rigid masculine booster shot by promising after sleeping with her that “he would never be her friend” it’s so clear that he wants nothing more than the comfort of a warm body to defrost his isolation in this lavish hotel. 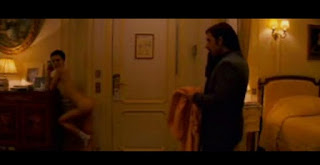 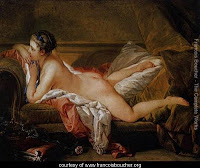 Ultimately the two do not consummate the relationship but Anderson has moved these characters through the span of twelve minutes into a complete reversal of where they began. When Jack asks his ex if she’d like to see his view of Paris, Anderson cuts to an extremely slow-motion tracking shot that presents a very naked Portman arched in a gloriously beautiful tableau. The shot carries the connotations of the Odalisque and reaffirms traditional masculine/feminine order in the universe of this film. With one final act of male chivalry, Jack clothes the nude Portman in his yellow robe. She, now the beautiful object of the eye presented for the camera, and he all dressed in black swaddling her in the luxury he has cast off.

They make their way to the balcony and look out over the beauty of Paris, city of love, to comfort each other from the pain and misery they’ve both run away from. Will this night and their reconnection officially sever the fantasy that Jack has constructed for himself or will the two hole-up in the Hotel Chevalier until every last cent has been squandered? That is not for us to know…but to hope for.

I enjoyed your analysis on this short. some where very basic to figure out but others got me thinking =) keep up the posts