Today marks the official release of Fallout.  We've partnered with UnderTheGunReview.net to release our little movie to the world.

Fallout is a suspenseful story of two brothers struggling for their lives while isolated in an underground shelter. A looming threat appears outside their walls as their rations and sanity slowly deplete within.

Fallout has already been named an official selection of the following festivals:

The film stars Michael A. LoCicero and William Valles as the two brothers. Derek and Michael have  worked together twice before on the films The Kiss (2010) and Blood Runs Cold (2011).

Fallout was shot between March and June of 2011 on a micro-budget of less than $2000.00. It is one of a growing number of films shot entirely on a DSLR camera (the Canon 7D). It is my belief that cinema need not stem from over-inflated budgets but must return to the basics of well-constructed film-form to be successful. 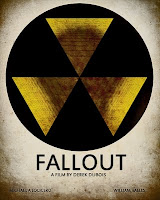 Congratulations to the cast and crew of Fallout.  Recently we've been notified of three official selections at upcoming film festivals.

Please come and see Fallout if you're in the area of any of the following: