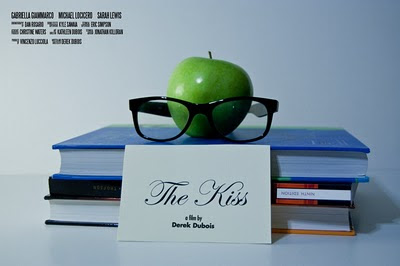 Posted by Derek Dubois at 6:14 PM No comments:

Currently, I am in the middle of shooting a new short film entitled "The Kiss."  In it, a young film studies student develops a crush on her professor, casting him in her student-film as the love interest in an attempt to generate sparks in real life.  I guess you can say that this is the whimsical, fictional version of my "Hot for Teacher" documentary.  And though there is surely much to be mined from the idea of my subconscious running with these ideas...I am currently much more entangled with the adjective I've been using to describe the film: whimsical.

From the very beginning I knew I wanted to make my own version of "Amelie."  Not a narrative ripoff, per se, but a short film that captures the tone of Jeunet's modern classic.  There aren't many films that exist which generate these feelings of whimsy.  Others integral to this project: "Punchdrunk Love" and "The Science of Sleep."

But what is whimsy?  This is what I continue to loop around to.  Unfortunately, after months of contemplation, I still have nothing more to offer than the supreme court judge's obscenity ruling: "I know it when I see it!"  I just cannot box whimsy into words.  Surely whimsy finds its lineage in comedy but is it truly a genre unto itself?  What are the shared characteristics between the aforementioned films and Chaplin roller skating on the precipice of almost certain death in "Modern Times?" Or the house falling down around Buster Keaton in "One Week?"

In Roger Ebert's review of Wes Anderson's "The Life Aquatic" he states that the film "suffers from terminal whimsy."  I must disagree with Ebert.  I adore "The Life Aquatic" and while the film certainly oozes with whimsy (as the rest of Anderson's oeuvre does) I don't believe this is a detriment to it but rather its saving grace.

I am now 1/3 of the way through shooting "The Kiss" and the script is constantly being revised as we shoot in order to slim it down and pick up the pace.  The only notions I have to go on are "What Would Amelie Do?" I guess the ultimate trait for whimsy is to have a narrative in which the stakes of the protagonist's journey aren't too severe.  But in order to compensate for this the characters themselves must be god damn electric.

I sincerely hope "The Kiss" reaches these aspirations.  I hope the narrative arc serves as an entertaining journey.  I hope that the character of Olivia Adams melts your heart while splintering your funny bone.  I hope that the exercises in style we've methodically considered aren't empty but kinetic and substantial.

In the meantime, if I ever lock down a definition for whimsy I'll be sure to post it here.


Posted by Derek Dubois at 5:00 PM No comments: